A Matter of Survival: Ireland’s Health System in the Age of Austerity 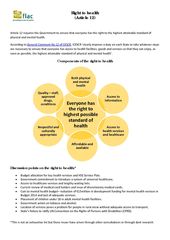 Article 12 of The International Covenant on Economic, Social and Cultural Rights (ICESCR) recognises the human right to the ‘highest attainable standard of physical and mental health.’ As part of the full realisation of these rights, States Parties should create conditions ‘which would assure to all medical service and medical attention in the event of sickness’ (1).

The highest attainable standard of physical and mental health denotes a right of access that is based on need and that sees the best outcomes possible for patients. However, the question must be asked whether Ireland, in implementing both a health policy and a fiscal policy of austerity, has vindicated patients’ rights to access adequate, affordable, quality healthcare with the most efficient use of available resources at one of the toughest periods in Ireland’s recent economic history. Since 2008, Ireland’s austerity project has reduced the health budget by 22%. At the same time, high unemployment and an ageing population has meant that reliance on the public health system has increased. Public patients have not been able to avail of privatised healthcare to mitigate the effect of these cuts and as a result there is a clear lack of parity of access to healthcare.  Austerity has seen the two-tier health system become further entrenched, just in time for the delayed response by the Government by taking steps to introduce universal healthcare and equality of access to under sixes irrespective of income. In reality, if you are a medical card patient or someone who cannot afford health insurance, you may not be able to access healthcare in a way that vindicates your human rights as a result of the cost restrictions and/or delay due to lengthy public waiting lists.

The coalition’s commitment in its Programme for Government to introduce free GP care for all was a key facet of its proposed reform of the primary care system (Programme for Government). Primary care in Ireland is very underdeveloped and Ireland is the only EU health system that does not offer universal coverage of primary healthcare.  In a Working Paper published by the Resilience Project of the Centre for Health Policy Management in Trinity College Dublin in March 2014, Ireland was described as an ‘extreme outlier’ in terms of the user charges that patients must pay in order to access treatment. Many people on modest incomes are subject to significant GP visit fees, and evidence suggests this is seen as a deterrent to accessing care.

Another corollary of austerity has been the transfer of the cost of healthcare from the public exchequer to public patients.  Since the recession began, for example, prescription charges and monthly drugs charges have increased significantly.  Designed as a blunt cost cutting tool, these measures disproportionately affect poorer patients and move Ireland further away from equality of access that Universal Health Insurance purport to address.

The Resilience Project Working Paper tracks how a health system under pressure did less with more in the initial years of the recession, but this trend was reversed from 2013 onwards. Continuing austerity has seen access to healthcare restricted through lower productivity and higher individual charges.  The Working Paper suggests that the long term cost and health ramifications of restricting access to healthcare have not been properly considered.

It is clear that the agenda of austerity is impairing outcomes for those patients who are reliant on the public health system. The Government’s failure to implement universal healthcare and remove patient charges means that certain groups do not have unfettered access to healthcare. The right to enjoy the highest attainable standard of health cannot be vindicated until the disparity of access between public and private patients is addressed, and service provision based on need as opposed to an individual’s financial position is prioritised.

The numbers clearly indicate that the mantra of ‘doing less with more’ may have initially yielded some efficiencies at the expense of service users, but it is now undermining the quality of healthcare and patient safety, and also impeding reforms that would support the development of primary health care. The right to health, one of the most fundamental and important human rights, must be a special focus for the Irish State in its response to the UN Committee in June.