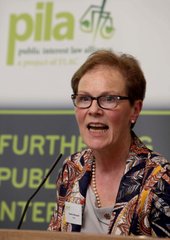 Oral Presentation: To the UN Committee on Economic Social and Cultural Rights

By: Noeline Blackwell on behalf of FLAC (the Free Legal Advice Centres) and the Our Voice Our Rights Civil Society consortium

My organisation FLAC is an NGO which is dedicated to the promotion of equal access to justice for all. We run a Public Interest Law Alliance which aims to match social justice and human rights organisations in Ireland with the legal expertise that they need. We have produced the Our Voice Our Rights report and update following consultation with over 80 organisations and individuals, including many of those here with me. I will highlight a few of the topics in our report and then other speakers will deal with issues of particular importance to them.

The recession brought about deep suffering and pain for many people living in Ireland. They were denied access to their fundamental rights through reduced access to basic services, less accessible remedies and increased poverty. The reports show that the poorest 10% of the population suffered the most as a result of the measures taken during the recession. The damage happened because of the crisis but also the choices made by government during the crisis. The focus of the government and its external funders - the EU and IMF - was on protecting the banking system and state finances. The people were told there was no choice.

This points to a structural gap in our decision making systems. There is no framework within which human rights must be formally considered and accounted for. The Covenant is not part of our domestic law. While ESC rights are mentioned in our constitution, they are guiding principles only. There is no obligation to take account of them in decision making in the courts or in government. Budget processes became more opaque with less consultation during the recession. Ireland did not ratify the Optional Protocol to the Covenant to allow individual complaints to this Committee. Institutional supports against poverty and racism were shut down. Recommendations of a constitutional convention that ESC rights should be incorporated into the constitution have not been acted on. During the recession and now, there are no domestic mechanisms to hold the State accountable for the rights guaranteed by the covenant. (section A1 both reports and A2, First Report).

Civil Society believes that such structures are necessary and would welcome recommendations from the Committee that the principles of the Covenant be incorporated into domestic law; that Ireland ratify the Optional Protocol and that the State conducts an urgent and thorough audit which tests our current legislation against the obligations of the Covenant.

Across all areas, civil society complains of the lack of disaggregated data including in relation to ethnicity , gender and incidents of domestic violence which make it impossible for the State itself to measure the current state of rights or progress made and make it difficult for civil society to monitor respect for rights. [First Report - p.23, p35, p.54, para 1, p.61 (domestic violence)]

The Our Voice Our Rights consortium would welcome recommendations for more thorough data collection and its use to mark baselines and progress in promoting human rights.

The Parallel report highlights a number of areas of concern in relation to work.

Women’s unequal place in the labour force and the increasing gap in pay between men and women are highlighted. (First Report 7.2) Women with children are significantly less likely to work – particularly if they are the sole parent (Update 10.3). Childcare costs are amongst the most expensive in the EU. (First Report 10.3)

There is a rise in the numbers of young people not in employment, education or training. Emigration is often the only option. (First Report 6.1, Update 6.1)

Over 20% of workers are in low paid employment. Some – particularly migrants – are at risk of being forced into deeply exploitative work conditions. Access to remedies for victims of trafficking are not considered to be effective, accessible or adequate. A recently agreed low pay commission has an unnecessarily narrow focus. (Update 7.1.1)

In 2002, this committee in 2002 was concerned about the treatment of disabled people in sheltered workshops. People still work in these without employment rights where any payment is at the discretion of the operator (First Report 7.1, Update 6.3).

Civil Society believe that it is necessary for the State to prioritise gender equity, to provide robust legislation for the victims of trafficking and others at risk of exploitation and to extend the remit of the Low Pay Commission to redress some serious imbalances.

Since the first report, there have been significant improvements in family law legislation, including the recently passed popular referendum recognising the right of same sex couples to marry but also to allow progressive transgender identity recognition and several other aspects of family law. Civil society is anxious that all of these laws be implemented and brought into force without delay. (First Report and Update - Section 10)

The most recent statistics at p.31 of the Update Report highlight that 15.2% of the population was at risk of poverty while 7.7% lived in consistent poverty in 2013. Children, unemployed people, lone parents, Travellers and Roma and those not able to work through illness or disability had the highest rates of consistent poverty.

13.2% of the population experienced food poverty in 2013. There is no National Food and Nutrition Policy or strategy that ensures affordability, accessibility and availability of healthy food and nutrition to all members of society. (Update 11.2)

Access to water remains a highly debated topic with current charges lower than previously intended but the charges take no account of income nor do they provide for any exemptions. Others will address other aspects of this right. (Update 11.3)

Those who can afford private health insurance have better access to care but the cost of insurance has risen and many had to discontinue it for reasons of cost. (First Report 12.1)

Waiting times have increased significantly for inpatient and outpatient care including services such as physiotherapy and mental health services. Costs are increasingly transferred on to patients. Ireland is the only EU country not to offer universal access to free or heavily subsidised GP care though a start is proposed with GP care to children under 6. (Update 12.1)

Civil Society would welcome recommendations from the Committee which recognise the need for targeted resources to provide timely and appropriate physical and mental health care respecting people’s dignity. Particular care should be taken to improve care to vulnerable groups. A number of suggestions from civil society are set out for Article 12 rights at p.9-10 of the First report and p.6 of the update.

A range of government measures taken during the recession negatively affect access and affordability of quality education including: reduction in teachers, rationalisation of support services, abolition of school grants, increase in transport charges, reduction of clothing and footwear allowance. (Update 13.1)

Children with special needs face particular obstacles. English language support to migrant children was cut in 2012 by 19% despite these children having the lowest reading scores. At third level, costs increased while student grants were cut. The majority who benefit from third level education are middle and professional classes. (First Report 13.1 and 13.2)

Civil Society would like to see a clear, practical long term strategy, with resources, to address educational disadvantage including specific plans for people with disabilities, migrants, Travellers and Roma

There is no national cultural policy, though one was promised in 2014. Despite reliable data, there is evidence that people from disadvantaged socio economic backgrounds with lower levels of educational attainment are much less likely to participate in cultural events than their better off counterparts. (Update 15.1, First Report 15.1)

Despite a number of commitments, those living in rural Ireland continue to be denied access to public services, education and the other advantages of the internet through a lack of access to broadband. (First Report and Update 15.4)

Civil Society would welcome recommendations which would promote culture throughout a wider community as well as recognition by government of the need for speedy action to end exclusion of rural communities through lack of broadband access.